3 Huge Signs the Divest From Fossil Fuels Campaign Is Winning

The campaign around the world to divest from fossil fuels has really heated up this year. Students at Swarthmore, Yale, Harvard and University of Washington among many others demanded their institutions put their money where their mouth is and stop investing “in an industry that is actively destabilizing the future that our education is meant to prepare us for,” as one student at Swarthmore put it.

“Coal is in fact a bad investment” – for California, divesting from coal made a lot of sense http://t.co/m2SeqRUf5u pic.twitter.com/CicdPmyDnL

Not all of the campaigns so far this year have been successful, but to date, 397 institutions have at least partially divested—including foundations, faith groups, pension funds, governmental organizations, universities, nonprofits and for-profits. One notable case came from the Norwegian Parliament, which took the unprecedented step of mandating that its sovereign wealth fund (the richest in the world) divest from coal burning and coal producing companies. And, in the past few weeks, there have been some more major divestment victories: 1. California Assembly votes to divest pension funds from coal California lawmakers passed a bill on Wednesday that requires the state’s two largest pension plans—California Public Employees’ Retirement System (CalPERS) and California State Teachers’ Retirement System (CalSTRS)—to divest their holdings from thermal coal.

ICYMI: California voted to pull $500b out of coal. Biggest divestment in the U.S. by far. http://t.co/gBFKZXbsQN pic.twitter.com/PBZGfJ9NPI — Karthik Ganapathy (@kartpath) September 3, 2015

“Coal is the fuel of the past and it’s no longer a wise investment for our pensioners,” said assemblyman Rob Bonta, who presented the bill before the assembly. “I’m pleased that my colleagues agree: it’s time to move on from this dirty energy source.” https://www.youtube.com/watch?v=4RKwxNTc4x8 The measure to divest CalPERS and CalSTRS—the largest public pension funds in the U.S.—is part of a legislative push in California to address climate change. “What a signal of hope amid California’s relentless drought and the planet’s hottest summer,” said Bill McKibben, co-founder of 350.org. “That California—Earth’s eighth biggest economy—will begin to pull its money out of fossil fuel stocks is a sign about what technologies are the future, and which are the dirty past.” Read page 1 2. Environmental leaders launch “Divest for Paris” At the Paris Divestment Conference on Tuesday, environmental leaders launched Divest for Paris, which challenges “institutions, individuals and governments to show climate leadership and align their investments with their values by divesting from fossil fuels ahead of the COP21 Climate Summit in Paris.”

The event was co-hosted by 350.org and the European Green Party. “If you say you want action in Paris, then you have a responsibility to divest from fossil fuels,”said 350.org Executive Director May Boeve. “By shifting resources from the dirty energy of the past to the 100 percent renewable energy of the future, institutions can model the type of action we need from countries at COP21. With our climate in crisis, divestment is a moral necessity.” Emphasising the power of divestment as not just a moral necessity, but a democratic one, Nicolas Haeringer, 350.org divestment organizer in France said: “French institutions, such as the Caisse des Dépôts—France’s most important public investor—should set the example and listen to local authorities. Divesting from fossil fuel helps address the climate crisis, but is also a democratic necessity: if investments have an impact on our future, then investors should listen to the demands of citizens and their representatives.” 3. The world’s largest coal port voted to divest from all fossil fuels The city of Newcastle, Australia, which has the most coal going through its port every day, voted last week to divest its $270 million investment portfolio from fossil fuels, including coal. “The importance of this decision cannot be glossed over,” says 350.org. “It is outstanding leadership for a city that is neck-deep in fossil fuels to make the call that it’s time to get out of them. Obviously this divestment decision won’t stop the coal port from continuing on at this point, but it sets the direction for the city going forward.” Prime Minister Tony Abbott came out against the decision as have other Australian politicians. 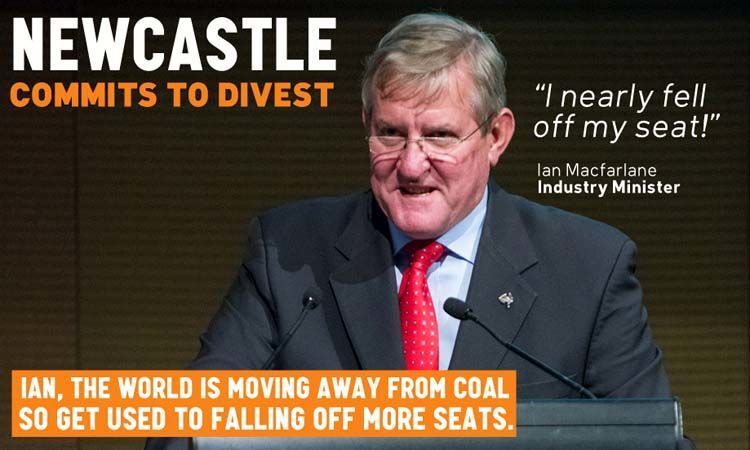 There are an increasing group of start-ups in Newcastle that are looking at a clean-tech future, we are embracing those opportunities. The coal downturn has particularly affected the Hunter Valley. Clean techs are going to be a significant employer moving forward. Council is being on the front foot about that.

In response to the Newcastle vote, McKibben said, “We’re suddenly and decisively, in a one-way transition to a renewable future and the only question—perhaps the most important question humans have ever faced—is whether we can make that transition fast enough to save the planet.” YOU MIGHT ALSO LIKE Third U.S. City Goes 100% Renewable

Bill McKibben: The Turning Point Towards a Low-Carbon Future