[Editor’s note: Hundreds of climate activists and renewable energy advocates gathered for a State of the Climate rally and march outside of Gov. Cuomo’s State of the State address in Albany Wednesday. Here below are the prepared remarks from Sandra Steingraber‘s speech. Shortly after, from the top of a stairway in the Capitol building, fracking infrastructure opponents unscrolled a 40-foot petition, bearing 1,000 signatures, that urgently calls on the governor to oppose the storage of dangerous, explosive LPG (propane and butane) in abandoned salt caverns under the shores of Seneca Lake. Like methane, propane and butane are the products of fracking. Along with the petition scroll, the group also delivered more than 500 letters to Gov. Cuomo’s office.]

Hi, everyone. My name is Sandra Steingraber, and I bring warm greetings from the banks of Seneca Lake in New York’s wine country. That’s my home.

One year ago, we all came together at Governor Cuomo’s 2015 State of the State address as New Yorkers Against Fracking to celebrate our singular, hard-won victory—the bold decision of our governor to leave in the ground, uncombusted, an immense amount of fossil fuel in the form of vaporous methane trapped in our state’s bedrock. 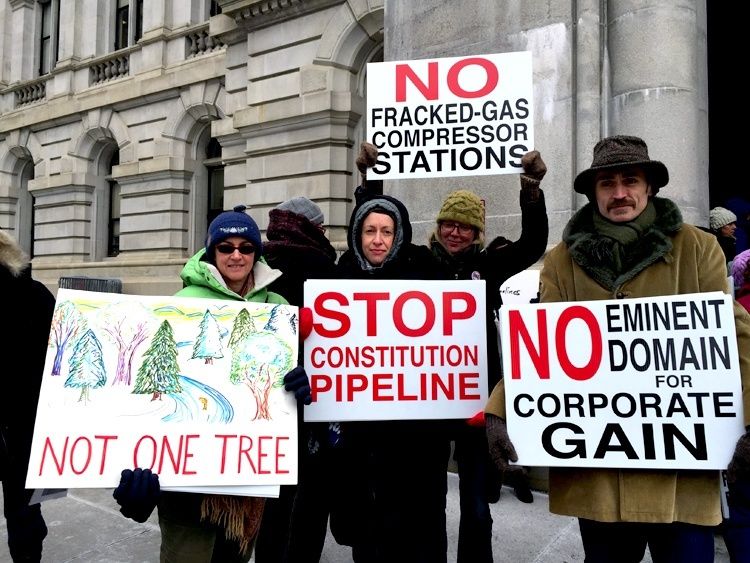 Opponents of the proposed Constitution fracked gas pipeline rally outside the Capitol Building in Albany on Wednesday morning, demanding that Gov. Cuomo deny the FERC-approved project a state water permit. Shortly after this photo was taken, news broke that New York Attorney General Eric Schneiderman had objected to the proposed plan by the pipeline developer to immediately begin clearing trees in the pipeline’s path—which runs 120+ miles from the Pennsylvania gas fields north to Schoharie County, New York—ahead of receiving all necessary approvals to commence construction. Photo credit: David Walczak

We worked, united, for years, night and day, to win a state-wide ban on fracking, and together, we made history. That methane is staying in the ground.

It all matters. It’s all important. It’s all necessary.

As we disperse from a single statewide fight against fracking to a multitude of local infrastructure fights, our activism diversifies and becomes more community focused. This trend represents a return to our activist roots. During the fracking wars, before the tribes united into a statewide coalition, we were also fighting on many local fronts and in many town halls. It’s how we began. 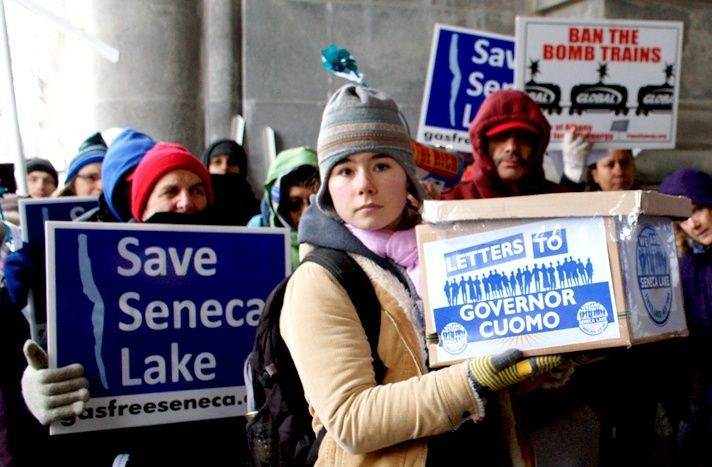 In this return to the local, we bring with us three precious things from our statewide fight. First, we bring scientific knowledge. We can now all cite chapter and verse on the global warming potential of natural gas vis-à-vis carbon dioxide over various time frames, for example. And that knowledge emboldens us.

Second, we have newfound political skills that empower us. And third, we have trusted friends from all over the state who encourage us. We know now how to stick together, reinforce each other’s work, and generate synergy. Together, we are greater than the sum of our parts.

But most critically, no matter how widely distributed our individual battles are, we still share a common goal. We want an end to New York’s ruinous dependency on fracked gas, along with all of the hateful, harmful infrastructure that comes with it.

We seek to replace every burner tip—from power plants to basement furnaces—with energy systems that look up—to the sun and the wind—instead of down at the graveyards of Devonian fossils.

Governor Cuomo, we want you to tell the world that New York is so done with keeping the lights on by building more crematoria for the burning of more prehistoric plants and animals, whose extraction from the ground and transportation to the flame destroys our climate, our water and our health.

An end to fossil fuels is our united goal.

And it’s a goal shared by people all over the world. I met many of them in Paris last month at the U.N. climate talks where climate activists were collectively referred to as “civil society.” Its members include indigenous people from South America and the Pacific Islands, grandmothers from Ireland, the knitting nanas of Australia. All together, they pressured negotiators into adopting a strong treaty based on good science.

Nevertheless, the ability to enact it, to “make it so,” depends on all of us.

Our vision for New York is that our state should serve as a shining, transformational example to the rest of the world for how to create a vigorous economy with 100 percent renewable energy.

To help make it so, here’s what we are doing back home at Seneca Lake. We are engaged in a David and Goliath struggle. The Goliath is a Houston-based gas company called Crestwood that wants to store fracked gases in the abandoned salt caverns along the lakeshore. Seneca Lake serves as a source of drinking water for 100,000 people. This lake is so deep that it also operates as a thermostat for the whole region, creating a microclimate ideally suited to the growing of wine grapes. 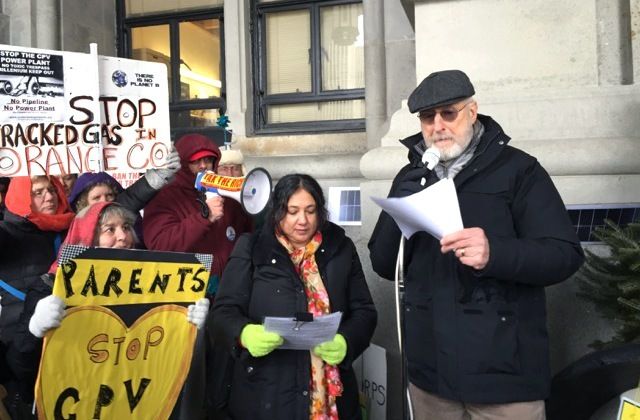 Actor and activist James Cromwell delivers a denunciation of the proposed CPV natural gas power plant in Orange County New York, as part of a speech at Wednesday’s State of the Climate rally outside the Capitol Building in Albany. Photo credit: David Walczak

The David is We Are Seneca Lake, which is made up of local members of civil society—teachers, nurses, winemakers, mothers, grandfathers, farmers, business owners, veterans—who blockade in Goliath’s driveway.

If there is no other way, we will stand in the way. Our ongoing blockade has continued for 16 months and resulted in 460 arrests. Six of these arrests happened just this Monday, involving New Yorkers from five different counties.

Always peaceful and respectful, We are Seneca Lake protesters are the girl scouts of civil disobedience, but our resolve is unrelenting. We know that the Federal Energy Regulatory Commission, which approves all these natural gas infrastructure projects, is largely unresponsive to all other forms of citizen opposition.

When there are other ways, We Are Seneca Lake also engages in lawful activism to redress grievance. Crestwood proposes to store in the Seneca salt caverns not just methane but also LPG. That decision rests with Governor Cuomo’s Department of Environmental Conservation and has not yet been made.

So, today, together with our partner, Gas Free Seneca, we will be delivering to the Governor’s office over 500 letters and a petition with over 1,000 signatures. These represent only the most recent batch of petition and letter deliveries we’ve made this year.

We’d like to partner with all of you. We know that Seneca Lake sits upstream from the multitude of pipelines and gas plants and compressor stations that you are fighting. If our salt caverns are filled with gas, Seneca Lake will be filling those pipelines.

Hence, we invite you to join us. Join us for a petition and letter delivery to the governor’s office. Join us on the shoreline of our beautiful home. We are all Seneca Lake.

Was Canada’s Latest Earthquake the Largest Fracking Quake in the World?