ExxonMobil officials may hem and haw when reporters ask them if the company still funds climate science denier organizations, but the numbers don’t lie.

The company says it acknowledges the reality of global warming and claims it supports a carbon tax, but its recently disclosed list of 2015 “public information and policy research” grantees shows it spent nearly $2 million last year on more than a dozen think tanks, advocacy groups and associations that dispute climate science and disparage renewable energy. 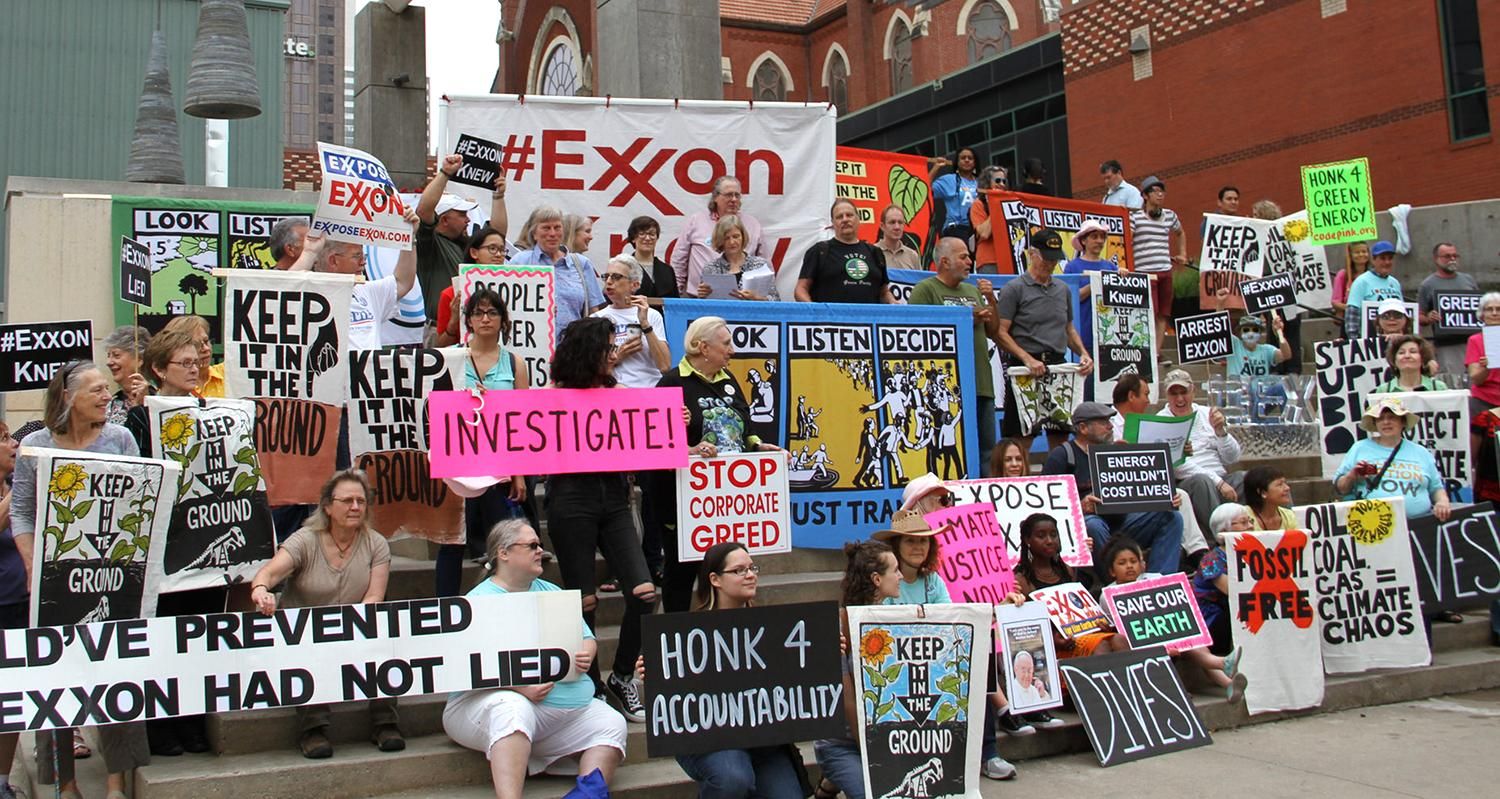 That’s significant from both a legal and political perspective.

There are legal implications because ExxonMobil is currently under investigation for allegedly misleading investors and the general public about climate risks. Its scientists, who were conducting cutting-edge climate research as far back as the 1970s, cautioned top management that continuing to burn vast quantities of fossil fuels could be catastrophic. Instead of heeding those warnings, the company stressed scientific uncertainty to protect its long-term profitability and bankrolled denier groups to spread disinformation.

Likewise, it is politically significant because, by sowing doubt about climate science and the potential of carbon-free energy sources, denier groups provide cover for elected officials to stand in the way of progress.

Shortly after the adoption of the Kyoto Protocol international climate treaty, Exxon went on a spending spree to block federal efforts to address global warming. The company, which was outed by a 2007 report by the Union of Concerned Scientists (UCS), spent $18.62 million from 1998—a year before it merged with Mobil—through 2005 on a network of more than 40 groups. From 2006 through last year, it spent another $14.35 million, for a total of $33 million.

That’s just what can be gleaned from the company’s tax filings and statements, however. Corporations are not required to disclose all of their political spending and there is reason to suspect ExxonMobil has spent quite a bit more on its climate disinformation campaign. A former ExxonMobil executive who wishes to remain anonymous told UCS that the company secretly allocated as much as $10 million annually for what insiders called climate “black ops” from 1998 through 2005.

In any case, according to its own figures posted last week, ExxonMobil spent $1.96 million on 16 denier and obstructionist groups last year. Ten of them, including the American Enterprise Institute, American Legislative Exchange Council, Federalist Society and Hoover Institution, were among those listed in the 2007 UCS report.

So what is ExxonMobil getting for its money? Let’s take a look at a handful of last year’s grantees to find out.

Half of ExxonMobil’s 2015 denier donations—$1 million—went to the U.S. Chamber of Commerce, the same amount it gave the Chamber in 2014.

The chamber acknowledges that climate change is happening, but discounts the prevailing scientific consensus that it is largely due to human activity, mainly burning fossil fuels. When pressed about the Chamber’s position during a March 2014 Senate hearing, Karen Harbert, head of the Chamber’s Institute for 21st Century Energy, replied that there is a “robust debate” over what is causing climate change. “It is caused by a lot of things,” she insisted.

Harbert’s scientifically indefensible comment was not surprising. The Chamber has a long history of disputing climate science and that has alienated some of its members. In 2009, Apple, Exelon, Nike, PNM Resources and PG&E, for example, cancelled their memberships after Chamber Vice President William Kovacs demanded that the Environmental Protection Agency (EPA) convene a “Scopes monkey trial of the 21st century” on climate science with witnesses, cross-examinations and a judge ruling on the reality of global warming. “It would be evolution versus creationism,” Kovacs explained. “It will be climate change science on trial.”

Those high-profile defections apparently had little impact on the Chamber’s position. In May 2014, just days before the EPA announced its draft Clean Power Plan to reduce power plant carbon pollution, the Chamber released a grossly misleading report attacking the proposed rule. The report, which was also sponsored by the American Petroleum Institute, was denounced not only by the EPA, but also by PolitiFact.com and the Washington Post. Among its many faults, the report wildly inflated the cost of the rule and failed to consider the benefits of cutting carbon emissions.

Last October, the Chamber and 14 other business associations filed a lawsuit against the EPA, arguing that the Clean Power Plan exceeds the agency’s authority to regulate the energy sector and the Chamber’s priorities for 2016 include opposing EPA efforts to curb carbon emissions as well as the agency’s science-based finding that global warming endangers public health and the environment.

ExxonMobil gave the Manhattan Institute $200,000 in 2015, boosting the company’s total donations to the self-described free-market think tank to $1 million since 1998. In turn, the institute has been cranking out papers and articles denouncing efforts to cut carbon and maligning renewable energy technologies.

Last summer, for example, Manhattan Institute Senior Fellow Oren Cass dismissed the idea of a carbon tax—ExxonMobil’s supposed preferred policy—as a “shell game” in an article he wrote for National Affairs. He followed up that essay in October with a white paper calling the impending UN climate negotiations in Paris a “farce.” What did Cass propose as a better solution? He urged policymakers to “abandon fruitless negotiations and focus instead on the realistic option of promoting innovation and preparing for any future adaptation that may be necessary.”

The institute’s longtime point man on energy, Robert Bryce—who previously worked for the ExxonMobil-funded Institute for Energy Research—says he’s “agnostic” about climate change. Over the years he has written numerous columns for the Los Angeles Times, New York Times, Wall Street Journal and other publications praising oil, natural gas and coal and disparaging wind and solar. A recent Bryce column in the National Review, for instance, denounced tax breaks and subsidies for the wind industry but ignored the fact that, since 1918, federal oil and gas industry subsidies have averaged $4.85 billion a year in today’s dollars.

ALEC, a secretive lobby group that drafts sample corporate-friendly legislation for state lawmakers, has received $1.79 million from ExxonMobil since 1998 and that investment is still paying dividends. At ALEC’s annual meeting last July, for example, corporate and legislator members collaborated on bills and resolutions that would inhibit state implementation of the Clean Power Plan, hamper the solar industry from selling electricity directly to homes and businesses and undermine state renewable energy standards by restricting investment in wind and solar.

One of the keynote speakers at that meeting, Stephen Moore—founder of the Club for Growth and a visiting fellow at the Heritage Foundation—declared at a plenary session that the “biggest scam of the last 100 years is global warming.” ALEC’s official position on climate change is only slightly more nuanced, leaving open the question of the role human activity plays. “Climate change is a historical phenomenon,” its website states “and the debate will continue on the significance of natural and anthropogenic contributions.”

With that scientifically challenged position, it’s no wonder ALEC invites speakers for its conferences from such notorious climate science denier groups as the Committee for a Constructive Tomorrow, the Heartland Institute and, of course, the Heritage Foundation—all former ExxonMobil grantees.

While ExxonMobil and other major carbon producers Chevron and Peabody Energy remain steadfast ALEC members, more than 100 corporations have severed ties with the organization for a variety of reasons, including its stance on climate change. Those companies include a number of heavy hitters in the energy sector, including American Electric Power, BP, ConocoPhillips and Shell.

From 2002 through last year, the National Black Chamber of Commerce (NBCC) received $1.1 million from ExxonMobil and the organization’s president, Harry C. Alford, is unapologetic about taking fossil fuel industry money. “Of course we do and it is only natural,” Alford states on the NBCC website. “The legacy of Blacks in this nation has been tied to the miraculous history of fossil fuel … [F]ossil fuels have been our economic friend.”

Last summer, NBCC published a report that falsely claimed the Clean Power Plan would pose “economic hardship” on poor and minority Americans. A UCS analysis found that the report was based on fraudulent claims from previously published studies, including the U.S. Chamber of Commerce’s anti-Clean Power Plan report from 2014. In fact, unchecked climate change would likely hurt poor and minority communities most.

More recently, Alford wrote an opinion piece attacking the Clean Power Plan for The Hill, a Washington political trade publication. Like the U.S. Chamber of Commerce’s bogus 2014 report, Alford’s June 29 column vastly exaggerated the cost of the proposed rule and did not factor in the billions of dollars in health and economic benefits that would result from cutting carbon pollution.

Last fall, UCS and reporters at InsideClimate News and the Los Angeles Times revealed that Exxon’s own scientists had warned the company decades ago about the potential for climate catastrophe. The new revelations also showed that the company responded to that bad news by downplaying climate risks and helping establish the climate science denial network.

A number of journalists did follow-up stories, pressing ExxonMobil officials about the company’s longtime support for denier groups. They didn’t always get the same answer.

During an interview last September with Richard Keil, ExxonMobil’s senior media relations advisor, WNYC’s On the Media host Bob Garfield pushed Keil for an explanation. “Please clarify this for me: Are not funding or did not fund them?” Garfield asked. Keil’s response was unequivocal. “We are not funding,” he said.

When asked the same question by the New York Times in early November, then-Vice President of Public and Government Affairs Kenneth Cohen likewise said no. “We stopped funding them in the middle part of the last decade because a handful of them were making the uncertainty of the science their focal point,” he said. “Frankly, we made the call that we needed to back away from supporting the groups that were undercutting the actual risk” of global warming.

Cohen’s response wasn’t a surprise. He made the same disingenuous claim back in February 2007, a few weeks after UCS disclosed that ExxonMobil had been spending millions of dollars on climate science denier groups. Greenwire, a trade news organization, reported that Cohen said the company “has stopped funding them.”

The surprise came on November 9, three days after the New York Times story ran, when PBS NewsHour host Judy Woodruff asked Cohen if ExxonMobil has been funding denier groups. This time he took a different tack.

“Well, the answer is yes,” replied Cohen, who retired from the company in January. “And I will let those organizations respond for themselves.”

But before anyone declares a victory for corporate transparency, it turns out that Cohen’s moment of candor was, well, momentary.

On December 1, a Washington Post story quoted yet another ExxonMobil spokesperson who qualified Cohen’s remark. Alan Jeffers, a media relations manager, said the company “rejects the premise” that it has been funding climate science denial.

“We were engaged with funding public policy groups on policy issues, not on science,” Jeffers explained. “We made our position known on some climate policies that made us unpopular with environmental activists and they tried to position that as us funding climate denial. And that’s just not accurate.”

Not accurate? As Jeffers, Keil and their former boss, Cohen, surely know, the think tanks, advocacy groups and associations ExxonMobil has been sponsoring all these years lie about the science to strengthen the argument against doing anything to address climate change. After all, if people believe climate science is a fraud—or at least “far from settled”—they will see no reason to support a carbon tax, cap-and-trade system or any other climate policy. And that line of reasoning, which protects the status quo, seems to suit ExxonMobil just fine.

Elliott Negin is a senior writer at the Union of Concerned Scientists. UCS staff members Dave Anderson and Jayne Piepenburg provided research for this article. Follow Elliott Negin on Twitter at @ElliottNegin.

7 Reasons Renewable Energy Will Soon Surpass Coal and Nuclear Power
Which Is Worse for the Planet: Beef or Cars?