The U.S. National Weather Service heat index forecast for June 18 looks scary. It indicates a dangerous situation that everyone who lives in the red areas in the map below should take steps to prepare for. I am not kidding. Extreme heat can be life threatening if not taken seriously.

I used to not pay as much attention to extreme heat until one dangerous day in July. A medical practitioner was collecting a small blood sample for a portable testing device and asked me: do you have ringing in your ears? With sweat pouring into my eyes—and a pounding headache slowing my thinking—I wearily answered yes. 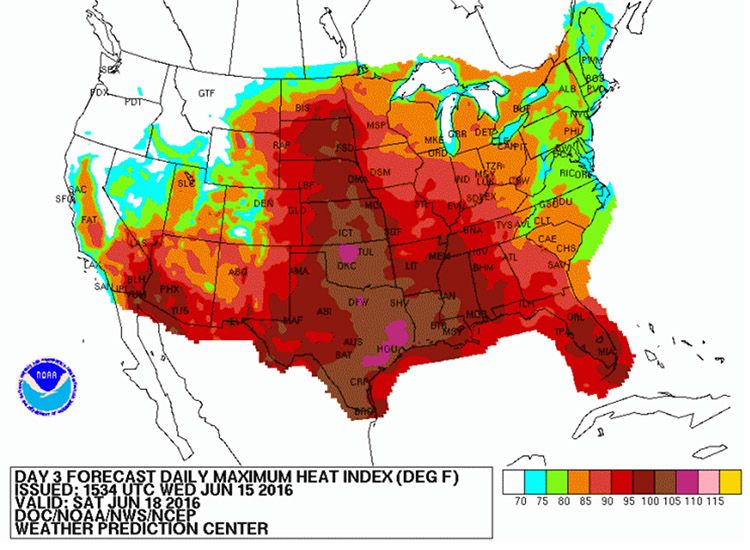 The results of the tests were sobering. I drank too much water without consuming enough potassium and other electrolytes. I was water-logged, my potassium levels were too low, my core temperature was raised to unhealthy levels and we were told to recover by sitting in a cool pool of water siphoned off a tributary to the Colorado River.

The medical practitioner had asked a group of us who had hiked down to the bottom of the Grand Canyon in July to participate in a survey about heat and health risk. The study was a follow-on to a similar study of marathon runners. At the time, the medical researcher reported finding that female marathon runners lost their potassium during exercise at far higher rates than men. She said women were not being adequately supplied because most common drinks with electrolytes don’t have enough potassium for woman athletes.

The advice given was to eat bananas and raisins to make up for this deficit. Since then I have learned even more about extreme heat while working on projects with Jalonne White-Newsome and other scientists who research the public health implications of extreme heat in a warming world.

Here is my top 10 list for ways to protect yourself, family, pets and neighbors from extreme heat:

2. “You can’t drink yourself out of heat stroke”—If you see someone is confused or other warning signs of dangerously elevated core temperature, call 911 and take immediate steps. Ice water baths are the preferred option for rapid cooling a person suffering exertional heat stroke during outdoor athletic activities. If this is not available, apply ice or cold packs wrapped in a cloth to the wrists, ankles, groin, neck or armpits. The elderly can develop heatstroke over several days, presenting symptoms including delirium, convulsions and coma. Check in with a doctor or urgent care, as heat stroke can kill.

3. Drink before you feel thirsty. Drink fluids (more water and less of the caffeinated beverages) to beat heat stress. Be sure to add electrolytes to your drink and eat a banana or raisins to replace those electrolytes lost through sweating.

4. Knock on doors, check on your neighbors, especially the elderly or young children and encourage going to cooling centers if necessary. Those who work or exercise outdoors have to take special precautions and know the warning signs.

5. Do not leave a child, a pet or grandparent or any living creature to stay in a car during the daytime in a heat wave. Every minute counts as the inside car temperature rises very rapidly when the outside ambient temperature is hot and the sun is up.

6. Don’t worry about the cost or carbon footprint of extra cooling during a heat wave. Without relief from the heat at night, a multi-day heat wave can become most dangerous during the latter days of a sustained heatwave. Do not try to save money if you have fans or air conditioning; ask for assistance to pay for higher bills during heat wave season. If necessary, call for transportation to get to the nearest cooling center or contact local health department who may have other protocols to assist with staying healthy during a heat wave.

7. Pay attention to the “feels like” temperature reported from local weather sources. Heat index combines temperature and humidity to give a more accurate risk to human health.

8. Wind is your friend—Air flow helps the body evaporate sweat and cool down. If you are in a stagnant indoor air situation, move outside to a shaded area where a decent wind is blowing or use air conditioning or a fan to create air flow over exposed skin. While away from home grab any object that can be used for a fan in a pinch to create temporary air flow.

9. Expect travel delays. Trains have to slow down when train tracks get too hot. In extreme cases, rail-track deformities can occur above 110 F. Extra weight may have to be taken off an airplane if the runway is too short or a longer queue may form on the longest runways at an airport. Hotter air is less dense, reducing the lift and thrust of the plane during take off. Asphalt can get gooey and disrupt travel.

10. Design matters for public spaces and buildings in heat waves. For example, a study found “unshaded playgrounds can reach temperatures that could burn children” especially in the south and southwest U.S. Another study in Michigan found that warmer indoor residences with “highest effect estimates to dew-point temperature were asphalt, non-high rise locations, homes built between 1940 and 1970 and those with prevailing urban surroundings and those with no central air conditioning.”

I have a souvenir from that day in July—a photograph we took near the place where we gave samples to participate in that heat stress study at the bottom of the Grand Canyon. It is of a large outdoor thermometer (not shaded) that was pegged at the maximum level (140 degrees Fahrenheit).

We decided to hike out of the Canyon starting at night. That was another step in changing my behavior to better adapt to the extreme heat that day and the many hot days since. The moonlit trail was beautiful during that night hike, helping keep my mind distracted from aching calf muscles.

Brenda Ekwurzel is a senior climate scientist and assistant director of climate research and analysis at the Union of Concerned Scientists.

May Shatters Yet Another Monthly Heat Record as CO2 Levels Soar

Toxic Chemicals Found in Residents Living Near Oil and Gas Operations in Pavillion, Wyoming
Looking Back at the History of Solar Power