“I am running for president,” Sanders told The Associated Press. “People should not underestimate me … I’ve run outside of the two-party system, defeating Democrats and Republicans, taking on big-money candidates and, you know, I think the message that has resonated in Vermont is a message that can resonate all over this country.”

“What we have seen is that while the average person is working longer hours for lower wages, we have seen a huge increase in income and wealth inequality, which is now reaching obscene levels,” Sanders continued.

“This is a rigged economy, which works for the rich and the powerful, and is not working for ordinary Americans. … You know, this country just does not belong to a handful of billionaires.”

Sanders will make a more formal announcement about his presidential campaign today. He is the first official challenger for the Democratic nomination to Hillary Clinton, who announced her candidacy earlier this month.]

It looks like tree-hugging liberals will get their dream presidential candidate after all. Vermont Sen. Bernie Sanders has been hinting for months that he might get into the primary race but since he’s an independent (and a for-real Socialist!) who caucuses with the Democrats in the Senate, it wasn’t clear what banner he’d run under. 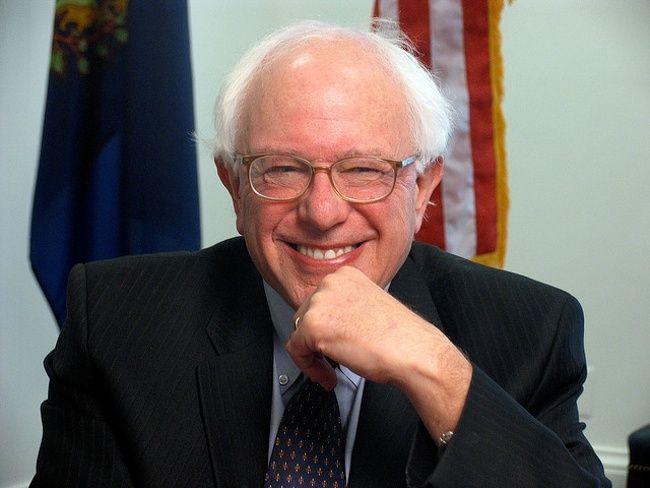 “Unless we take bold action to reverse climate change, our children, grandchildren and great-grandchildren are going to look back on this period in history and ask a very simple question: Where were they?,” says Sen. Sanders. Photo credit: Troy Page/TruthOut.org

Now news sources such as Vermont Public Radio are reporting he’ll announce his run Thursday as a Democrat. According to reports, he’s planning to release a short statement this week and hold a campaign kickoff event in his home state in upcoming weeks. He’ll join Hillary Clinton and Maryland ex-governor Martin O’Malley in the race. Former Virginia Senator Jim Webb is also looking at a possible run.

Sanders has been focusing his message on the decimation of the middle class and how the Trans-Pacific Trade deal currently under consideration would exacerbate that. But with a lifetime score of 95 percent from the League of Conservation Voters, he’s also an environmentalist’s dream. LCV has also praised Clinton’s environmental record; she was the keynote speaker at their annual dinner in December.

“Unless we take bold action to reverse climate change, our children, grandchildren and great-grandchildren are going to look back on this period in history and ask a very simple question: Where were they?” says Sanders. “Why didn’t the United States of America, the most powerful nation on Earth, lead the international community in cutting greenhouse gas emissions and preventing the devastating damage that the scientific community was sure would come?”

Sanders is a member of the Senate Environment and Public Works Committee, where he’s usually taking positions that are polar opposites of those of Chairman James Inhofe (R-OK) who threw a snowball on the Senate floor to “prove” his contention that global warming is a “hoax.” Sanders is also a member of the Energy and Natural Resources Committee.

“As a member of both the Environment and Public Works and the Energy and Natural Resources Committees, Senator Sanders is uniquely positioned to fight for progressive energy policies and increased environmental protection—issues of great importance to him and to all Vermonters,” says the Energy & Environment website, which features a photo of Sanders with 350.org founder Bill McKibben taken at last year’s People’s Climate March in New York City. “Senator Sanders is a leading voice on the need to address global warming by reducing greenhouse gas emissions.” 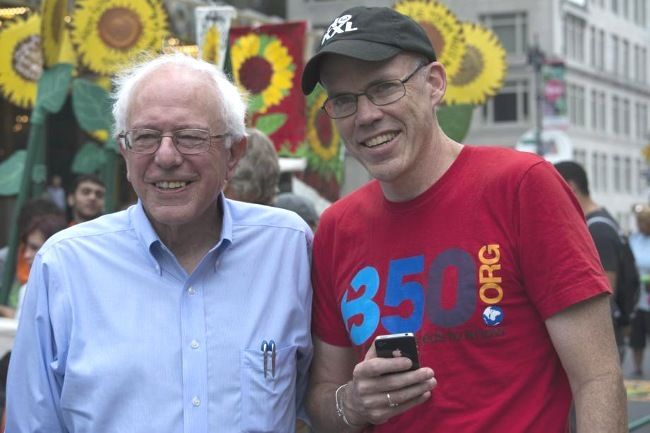 Calling climate change “the greatest environmental threat facing the planet,” Sanders was a co-sponsor of the Climate Protection Act of 2013 which would tax carbon and methane emissions from coal, oil and natural gas production and use the revenue to invest in energy efficiency and sustainable energy, including investments in wind, solar, geothermal, biomass and plug-in vehicles. Sanders also introduced the End Polluter Welfare Act to end subsidies and tax breaks for fossil fuel companies. He’s an opponent of subsidies and tax breaks for the nuclear power industry as well.

Fracking? He’s unequivocally against it. “I’m very proud that the state of Vermont banned fracking,” he said last year. “I hope communities all over America do the same.”

And unlike Clinton, whom he worked with when she was in the Senate to pass the Green Jobs Act, which created a green jobs workforce training program, he hasn’t been coy about where he stands on the Keystone XL pipeline.

In an interview with CNN in January, when the pipeline was under consideration in the Senate, he said, “The scientific community tells us, virtually unanimous accounts, that climate change is real. It’s already causing devastating problems and if we do not transform our energy system away from fossil fuel, this planet is gonna face some serious problems. The idea that we would give a green light for the transportation of 800,000 barrels of some of the dirtiest oils all over the world makes no sense to me.”

Sanders was also responsible for introducing an amendment to the Keystone Pipeline approval bill to put the Senate on record that climate change is real and human-caused. 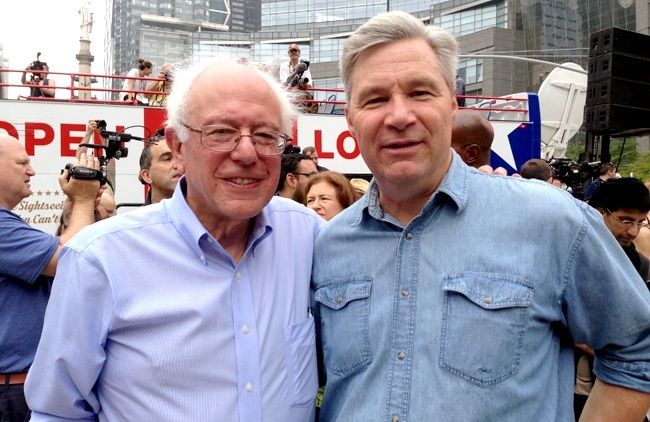 In the January CNN interview, Sanders was asked if he was running for President. He replied, “I”m giving some thought to it. Taking on the billionaire class and Wall Street and the Koch brothers is not easy,” and he expressed some pessimism that it would be possible in the future to elect a candidate advocating for the middle class and working people. While fossil fuel tycoons Charles and David Koch are looking over candidates to find someone in whom to invest the nearly $1 billion they’ve promised to spend on next year’s presidential race, it’s clear Sanders won’t be getting their call.