In support of the dying nuclear power industry, the New York Times Editorial Board has penned an inadvertent epitaph.

Appearing in the May 2 edition, The Right Lessons from Chernobyl twists and stumbles around the paper’s own reporting. Though unintended, it finally delivers a “prudent” message of essential abandonment. 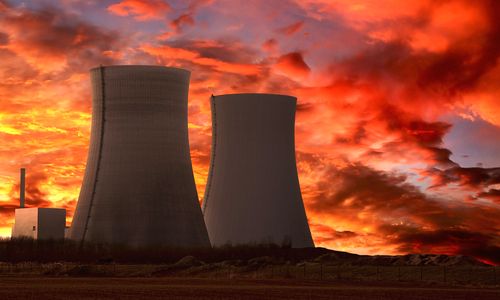 The Times does concede that “The world must do what it can to increase energy efficiency and harness sun, wind, ocean currents and other renewable sources to meet our ever-expanding needs for energy.”

The edit drew 288 entries into its comment section before it was capped. I’ve posted one of them at NukeFree.org. Overall they’re widely varied and worth reading.

Because the Times is still the journal of record, the edit is a definitive statement on an industry in dangerous decline.

The edit begins by citing the “New Safe Confinement” shield being built over the seething remains of Chernobyl Unit 4. Already “almost a decade behind schedule,” its completion is “a race against time” due to the “decrepit state of the sarcophagus” meant to contain the radiation there.

That we still must fear Chernobyl more than 28 years after it melted and exploded underscores the “nightmarish side of nuclear power.”

That the “vast steel shield” may not be done in time, or may not even end the problem, is downright terrifying, especially in light of the “near-bankruptcy of Ukraine,” not to mention a political instability that evokes horrific images of two hot wars and the cold one.

Amidst rising tensions between Ukraine, Russia and the west, the corporate media studiously avoids Chernobyl. But Belarus and Ukraine long ago estimated its cost to their countries at $250 billion each. One major study puts the global death toll at more than a million human beings.

The Times says Chernobyl’s terror is “more powerful than Three Mile Island before it or Fukushima after it.”

Three Mile Island suffered an explosion and melt-down in 1979. Exactly how much radiation escaped and who it harmed are still unknown. The industry vehemently denies that anyone was killed, just as it denied there was a melt-down until a robotic camera proved otherwise.

At Fukushima, there is no end in sight. Bad as it was, Chernobyl was one core melt and explosion in a single Soviet reactor in a relatively unpopulated area. Fukushima is three core melts and four explosions in American-designed General Electric reactors, of which there are some two dozen exact replicas now operating in the U.S., along with still more very similar siblings.

Spent fuel is still perched dangerously in damaged pools high in the Fukushima air. Thousands of rods are strewn around the site. The exact location of the three melted cores is still unknown. At least 300 tons of highly radioactive liquid pour daily into the Pacific, with the first of their isotopes now arriving on our west coast. Huge storage tanks constantly leak still more radiation. The labor force at the site is poorly trained and heavily infiltrated by organized crime.

The Times itself has reported that a desperate, terrified population is being forced back into heavily contaminated areas. Children are being exposed en masse to significant radiation doses. Given the horrific health impacts on youngsters downwind from Chernobyl, there is every reason to fear even worse around Fukushima.

But the Times Editorial Board follows with this: “Yet it is also noteworthy that these civilian nuclear disasters did not and have not overcome the allure of nuclear power as a source of clean and abundant energy.”

“Allure” to whom? Certainly the corporations with huge investments in atomic energy are still on board. The fossil fuel industry is thoroughly cross-invested. And extraordinary corporate media access has been granted to pushing the odd belief that nuclear power can help mitigate global warming.

But the vast bulk of the global environmental movement remains firmly anti-nuclear. Grassroots opposition to re-opening any Japanese reactors is vehement to say the least. Amidst an extremely popular revolution in green technologies, U.S. opinion demands that nuclear subsidies be cut, which means death to an industry that can’t live without them.

It’s here the edit falls entirely overboard: “Only Germany succumbed to panic after the Fukushima disaster and began to phase out all nuclear power in favor of huge investments in renewable sources like wind and sun.”

Germany’s green transition has been debated for decades, stepped up long ago by Chernobyl. With strong popular backing, the German nuclear phase-out, as in Sweden, Italy and numerous other European nations (Denmark never built any reactors) has long been on the table. The center-right Merkel government finally embraced it not only because of Fukushima, but because the German corporate establishment decided that going green would be good for business. As energy economist Charles Komanoff has shown, they’ve been proven right.

Despite the predictable carping from a few fossil/nuke holdouts, Germany will shut its reactors, as will, eventually, all other nations. The edit says there may be “an increase in greenhouse emissions,” but it will be “temporary.”

But as some in the respondents section point out, the Times ignores nuclear power’s own greenhouse impacts, especially in the mining, milling, transport and enrichment of radioactive fuel. Not to mention the heat emissions into the air and water from regular operations and periodic melt-downs and blow-ups. Or those involved with the as-yet unsolved management of radioactive wastes, both at exploded sites and where thousands of tons of spent fuel rods and other hot detritus still sit.

The Times does concede that “The world must do what it can to increase energy efficiency and harness sun, wind, ocean currents and other renewable sources to meet our ever-expanding needs for energy.” But the vision of a green-powered Earth is no longer the property of a Solartopian movement. As the Times and other major publications have long reported, Wall Street has thoroughly rejected atomic energy and is pouring billions into renewables, especially photovoltaics (PV) which convert solar energy to electricity.

A technological, financial and ecological revolution is well underway. Maybe the Times Editorial Board should consult its financial section.

The edit then cites a recent Intergovernmental Panel on Climate Change (IPCC) report as a reason to keep nuclear energy as “part of the mix.”

But the IPCC report emphasizes atomic power’s negatives, most critically safety, economics, waste and timing. It posits no parallel burdens on the transition to renewables, which it says is both affordable and do-able within the time frame necessary to save the planet.

Even if public opposition somehow dissolved, the technical and economic prospects for small modular or other “fourth generation” nukes have crumbled. With the industry’s history of gargantuan cost overruns and endless delays, this editorial doesn’t bother to argue for them.

For nuclear to “play a role” in fighting climate change, the industry must keep its old, increasing decayed reactors on line. But many of the planet’s 400 commercial nukes are older than that crumbling sarcophagus at Chernobyl.

Japan’s Abe regime wants to re-open all 48 reactors idled since Fukushima. But as Reuters and others have reported, 30 or more can’t meet current safety standards or face too many technical barriers to safely or economically re-open.

With twice as many licensed reactors in the U.S., could the number of below-spec nukes here be more like 60?

Four of these decrepit nukes shut last year, with at least one more—Vermont Yankee—scheduled to close in 2014. For health, safety, economic and ecological reasons, many more of these dangerously decayed nukes are poised to go down.

But it’s precisely these the Times edit defends:

The reasons for the shutdowns vary. In some cases, competition from cheap natural gas and from nearby wind farms has forced reactors to operate at a loss. In other cases, a marginal plant’s economic viability has been jeopardized by the cost of replacing steam generators to extend the life of a plant or by the cost of upgrading safety systems to meet new requirements imposed after the disaster in Fukushima.

As it begs for “prudence” before shutting more reactors, we must ask:

Does the Times Editorial Board really want us to ignore the need to replace unsafe steam generators (as at California’s San Onofre) and just operate them as is?

Should we really ignore “new requirements imposed after the disaster at Fukushima?”

Should we also forget that the Union of Concerned Scientists and others report that many of those old nukes that can’t meet basic fire protection standards?

How about the U.S. reactors still dangerously vulnerable to earthquake damage … including the two at Indian Point, just north of the Times newsroom.

And those downriver from large dams whose failure could release floods parallel to the tsunami that swamped Fukushima.

Is all this okay with the Times Editors? Will the Grey Lady now provide the radioactive disaster insurance missing since 1957?

The edit does spare us more hype about the “nuclear renaissance.” After a decade of being pushed to buy a whole new fleet, we’re now begged to be “prudent” about shutting the old tugboats.

Above all, we’re not to be “spooked” into mistrusting an industry that for decades said reactors could not explode, but has now blown up five and melted five.

For the finale of this landmark edit, we hear that “the great shield over Chernobyl should also entomb unfounded fears of using nuclear power in the future.”

A decade behind schedule, millions over budget, technologically unproven, threatened by political instability, surrounded by the dead and dying, that canopy’s sole purpose is to somehow contain future damage from a failed reactor that has already irradiated the planet, the people downwind, the ecological and economic future of the region.

If the New York Times wants to anoint Chernobyl’s unfinished second shroud as the prime symbol of today’s atomic industry, then this editorial is indeed a fitting epitaph.

United States Army Base Fort Belvoir Installs Solar Heating System on Benyaurd Pool; System is Expected to Save Over $11,000 Annually
Report Rules Out Industry Myth That Coal Will Alleviate Poverty in the Developing World