Oregon: Switching From Coal to Renewable Energy Is a Bargain

Oregon may have a reputation for rainy weather, but the outlook for the renewable energy there is definitely sunny.

Earlier this year the state passed legislation that requires utilities to stop generating electricity from coal by 2030. At the time, one of Oregon’s two main energy utilities, Pacific Power, predicted that the switch to renewables would come with a fairly high cost, hitting customers with a rate increase of 0.8 percent per year through 2030. That’s a cumulative increase of about 12 percent over the next 14 years. 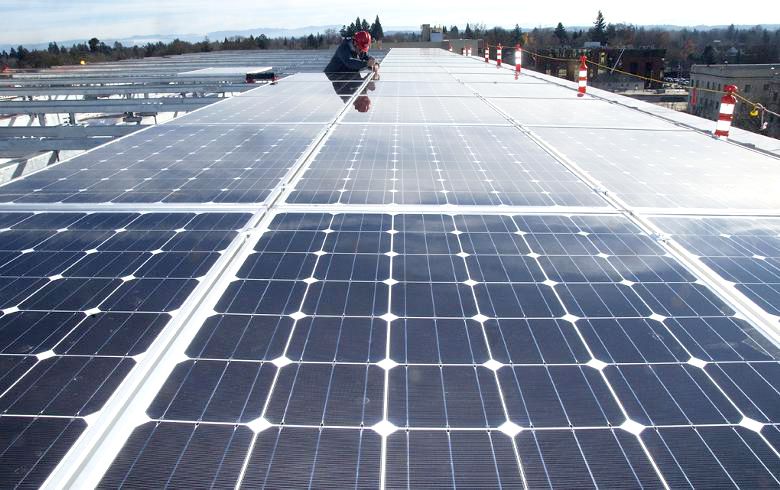 The cost savings come not only from solar energy’s increasing efficiency and falling prices for the technology output but from the volume of development.Oregon Department of Transportation

Since then, however, things have changed. After the legislation passed, Pacific Power put out a request for bids for renewable energy projects and developers came back with prices much lower than expected.

How low? Try 0.1 percent through the year 2028. That’s not per year, like the previous estimate. It’s the projected rate increase for the entire time period.

That amounts to a 10-cent rate increase for every current $100 in electricity costs.

What happened? “When we did our initial analysis of this, we didn’t have the latest prices from the markets,” said Pacific Power spokesperson Ry Schwark. “We went out in the market and found that there is such an amount of renewable energy coming online in the next couple of years that we were basically able to move our coal-free compliance date up two years to 2028,” without much of a rate impact on consumers, he said.

Schwark said the company is preparing contracts with 12 new renewable energy projects—including 11 big solar farms and one wind array—that will come online over the next year and a half. Ten of those sites are in Oregon. (Pacific Power also does business in Washington state and California, although most of its customers are in rural Oregon).

The cost savings come not only from solar energy’s increasing efficiency and falling prices for the technology output but from the volume of development. “There are such an amount of renewables coming online across the network that we can get really competitive prices,” Schwark said.

Schwark declined to comment on how much Pacific Power will spend to acquire the renewable energy, but data provided by the Solar Energy Industries Association (SEIA) showed how much more affordable solar has become over the past few years. “We’ve seen reported power purchase agreement prices for utilities to buy power from new utility-scale solar projects on the order of $40 to $50 per megawatt hour, which is competitive with electricity generated from existing coal and natural gas plants,” said Alex Hobson, a spokesperson for the Washington, DC–based trade group.

“At these prices and as utilities grow more comfortable with the operating characteristics of solar plants, solar will make up an increasingly large share of America’s energy portfolio,” Hobson said. That’s already happening: SEIA’s list of major solar projects catalogs more than 3,300 megawatts’ worth of utility-scale solar projects that are under construction across the U.S. Another 53,000 megawatts’ worth of projects are in development.

Schwark said this is just the first step and that Pacific Power expects to make additional renewable acquisitions as prices continue to fall. That will be necessary, because the coal-free regulations in Oregon also require the state to obtain 50 percent of its energy from renewables by 2040. “There are more things we’ll need to do over the next 20 years to meet that, but as an initial step this is quite a positive one,” he said.

This article was reposted with permission from our media associate TakePart.

Solar Panels on Carports
Obama: ‘One of the Most Urgent Challenges of Our Time Is Climate Change’