For more than 10 years, gas companies have been pushing plans for huge liquefied natural gas (LNG) terminals on the Columbia River and Coos Bay, and Oregonians have stood firm to protect our farms, forests and rivers. Today, hundreds of Oregonians including farmers, ranchers, business owners and conservationists are going to send a clear message to Oregon’s new Governor that the time has come for Oregon to reject fracked gas export terminals. 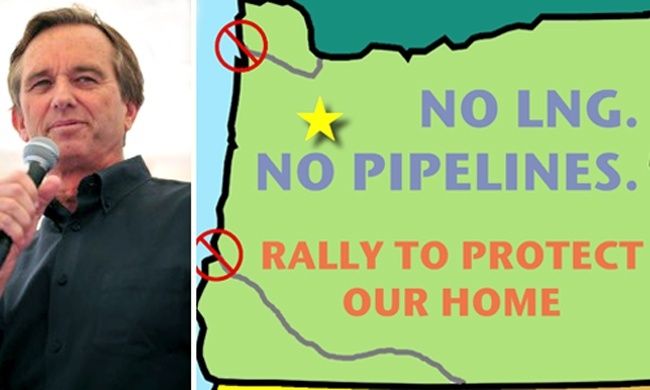 At Noon at the capitol steps in Salem, Oregon, a coalition of groups will rally to oppose LNG exports. The rally will include speeches from tribal leaders, impacted landowners and a keynote speech from Robert F. Kennedy Jr., president of Waterkeeper Alliance.

“Oregon is viewed as a leader in combating climate change, yet the fossil fuel industry is pushing to make Oregon a trafficker of fracked gas to the entire world through these LNG export proposals,” said Kennedy. “Oregon should stand firm in protecting iconic salmon-bearing rivers like the Rogue and Columbia and in the process reaffirm its goal of reducing climate pollution by rejecting LNG export terminals and pipelines.”

Oregon faces two LNG export proposals—one in Coos Bay and the other on the Columbia River—coupled with associated proposals to construct hundreds of miles of new natural gas pipelines throughout Oregon and Washington. Opposition to the LNG projects has created unusual alliances, inspiring rural landowners near proposed pipelines to join forces with conservationists and climate activists.

“As a proud conservative Oregonian, I oppose the pipelines for LNG exports because it would destroy valuable farmland and forestland,” said rancher Bill Gow of Douglas County, Oregon. “There’s no way these companies are going to put a big scar through the middle of my ranch.” Like Gow, hundreds of Oregon and Washington families may have their land condemned to install a pipeline to export gas to overseas markets.

During the rally, the public will call on Oregon decision-makers to use the state’s power to protect Oregon from LNG projects while supporting clean energy, healthy rivers and forests, private property rights, safe communities and a stable climate.

Don West, Manager of the Cannery Pier Hotel in Astoria and owner of the Astoria Crest Motel, plans to call on Gov. Brown to take a firm stand against LNG exports. “The future of our community and our business—a future that creates jobs by drawing people to iconic, salmon-bearing rivers like the Columbia—depends on the State of Oregon rejecting LNG exports. I’m inspired to be one of many voices from all walks of life joining this common call for Gov. Brown and state leaders to protect our home.” 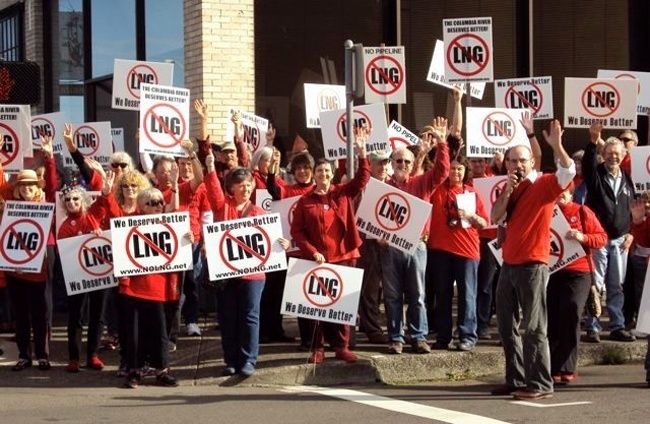 “The Jordan Cove LNG terminal poses an unacceptable safety risk to our community,” said North Bend resident Jody McCaffree. “We are also concerned about the impacts this project would have to existing jobs in the timber, fishing, crabbing, clamming, oyster, tourism and recreation industries in Coos Bay area.” Photo credit: Coalition Against LNG Exports

“These would be the largest fossil fuel export projects on the West Coast, so we are speaking out and asking Governor Brown to help defend our state from exporting fracked gas as LNG,” said Sarah Westover, LNG Organizer of Rogue Riverkeeper. “This issue impacts hundreds of families, hundreds of rivers, and the stability of our climate, and we stand united against LNG exports anywhere in Oregon,” she added.

LNG is super-cooled methane gas that requires massive amounts of energy and freshwater to produce. Energy companies have been working for ten years on two proposals for large gas pipelines and LNG terminals in Oregon, and the companies now intend to use the proposed terminals to sell fracked gas to overseas markets.

“The Jordan Cove LNG terminal poses an unacceptable safety risk to our community,” said North Bend resident Jody McCaffree. “We are also concerned about the impacts this project would have to existing jobs in the timber, fishing, crabbing, clamming, oyster, tourism and recreation industries in Coos Bay area.”

Concerned citizens will travel to Salem on buses and carpools from Coos, Douglas, Jackson, Clatsop, Columbia and other counties to send a clear message to Governor Brown, state agencies, and elected officials that Pacific Northwest residents are united against LNG exports.

Which Country Will Be First to Go Completely Underwater Due to Climate Change?

Solar Is the Fastest-Growing Source of Renewable Energy in America