The powerful global response to the terror attack on the French magazine Charlie Hebdo must now face a terrifying reality: It’s a horrible thing when an organ of free speech is assaulted and journalists die.

It will be an apocalyptic thing when it happens to an atomic reactor and whole continents are irradiated, with children first to suffer, a death toll in the millions and eco-economic impacts beyond calculation. 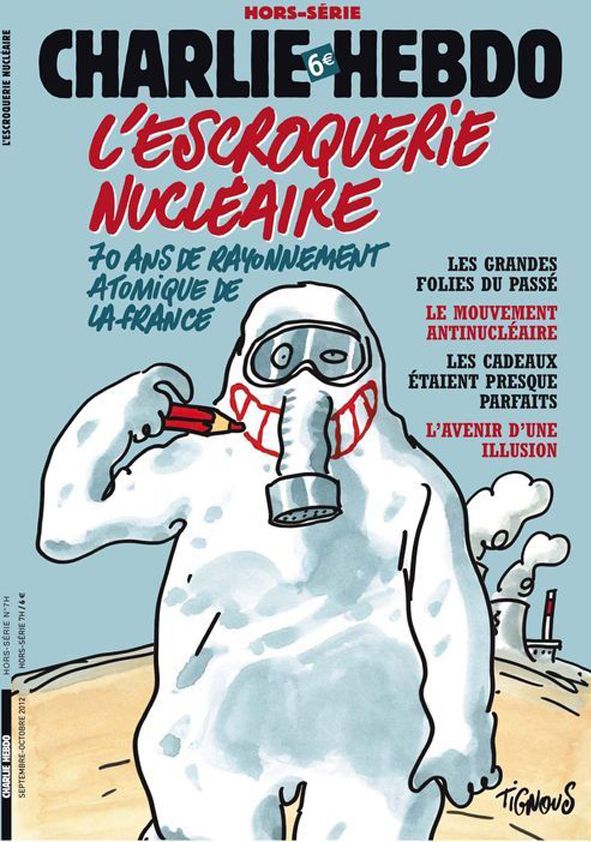 Slain cartoonists at Charlie Hebdo were allies of anti-nuclear movement. Here’s a cover from the September-October 2012 issue of Charlie Hebdo.

For decades our global security apparatus and its attendant media mavens have pretended that the radioactive elephant in the room of global terror does not exist. But after Fukushima, Chernobyl, Three Mile Island, 9/11, Charlie Hebdo and so much more, a terrible reality has become all too clear.

We have seen four American-designed reactors explode and three melt at a single Japanese site. A severely escalated thyroid cancer rate has followed, with more health disasters yet to come. Some two dozen sibling GE reactors currently operate in the U.S.

We have seen an entire continent—and more—irradiated by Chernobyl, with at least one major study calculating well over a million downwind deaths. Chernobyl-style reactors still operate in Europe.

We have seen a U.S. reactor rocked by a 1979 hydrogen explosion and melt-down (repeatedly denied by its owners) that poured still-unknown quantities of radiation into the Pennsylvania countryside.

Today, the Ohio Public Utilities Commission is poised to force ratepayers to subsidize the fault-riddled Davis-Besse nuke—a Three Mile Island clone—with millions of gouged dollars to keep it running despite profound vulnerability to its own advanced deterioration and the absolute impossibility of protecting it from a possible terror attack.

It has long been established that the accused 9/11 attackers contemplated hitting the reactors at Indian Point, 35 miles up the Hudson from Manhattan.

Neither U.S. military nor local police forces could have stopped such an attack, which could have poisoned millions of people in the American northeast and gutted the entire U.S. ecology and economy.

Not one of them can be effectively guarded against a concerted terror attack. Each could spew massive radiation releases and do untold damage to the human race, the planetary ecology, the global economy.

Every serious student of terrorism knows that such an attack is merely a matter of time. Every serious expert on atomic reactors knows the potential human costs simply cannot be calculated.

It’s impossible for a sane world to comprehend why someone would want to attack one of these reactors.

But it’s impossible to deny that there are probably those right now contemplating how to do just that.

Perfectly protecting these reactors is impossible. But their owners are almost entirely shielded from liability from the consequences of such an attack.

And the fallout would utterly dwarf any other catastrophe the world has yet seen.

We now have the ability to replace all these reactors with renewable sources and added efficiencies that are cheaper, cleaner, more reliable and—above all—safer than atomic reactors.

No city will be irradiated by an attack on a wind farm. No downwind children will die from a terrorist machine-gunning at a solar facility.

All across the world, from Illinois and Ohio to France and Japan, corrupt corporate reactor owners demand public subsidies to keep these obsolete, non-competitive, supremely dangerous machines in operation.

But in the wake of the Charlie Hebdo massacre, and of so much else we now know about today’s world, there’s no excuse for running these reactors—anywhere.

Why must we wait for the inevitable disaster to occur, and for the talking heads to then tell us that such insanity “could not have been predicted?” And that there is “nothing to worry about?”

Charlie Hebdo was an anti-nuclear publication. Its cartoons repeatedly lampooned the horrible dangers of this insane technology.

Its warnings now bear an added dimension, far deeper than the atomic industry—or the world’s leaders—seem willing to face.

As millions march in fear and mourning, will we now ignore Charlie twice? Are you willing to pay the next radioactive price?

Or will you act, and shut them all down?

Harvey Wasserman wrote SOLARTOPIA! OUR GREEN-POWERED EARTH and has reported on security risks at nuclear reactors since the 1970s.