People of faith, civil society groups and communities impacted by climate change marched together in Rome today to express gratitude to Pope Francis for the release of his encyclical on the environment, Laudato Si’, and call for bolder climate action by world leaders. 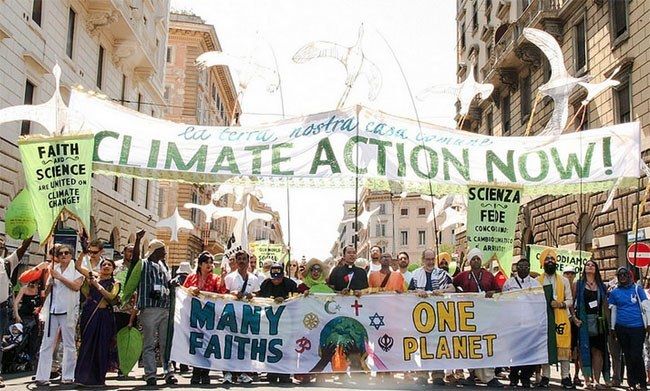 Thousands marched in Rome today to express gratitude to Pope Francis for the release of his encyclical on the environment. Photo credit: 350.org

Under the banner of “One Earth One Family,” the march brought together Catholics and other Christians, followers of non-Christian faiths, environmentalists and people of goodwill. The march ended in St. Peter’s Square in time for the Pope’s weekly Angelus.

The celebratory march was animated by a musical band, a climate choir and colorful public artwork designed by artists from Italy and other countries, whose work played a major role in the People’s Climate March in New York City last September. Among the artwork was a 75-meter sign in the shape of a green leaf, with verses from Scripture which speak to God’s care for creation and for the poor. 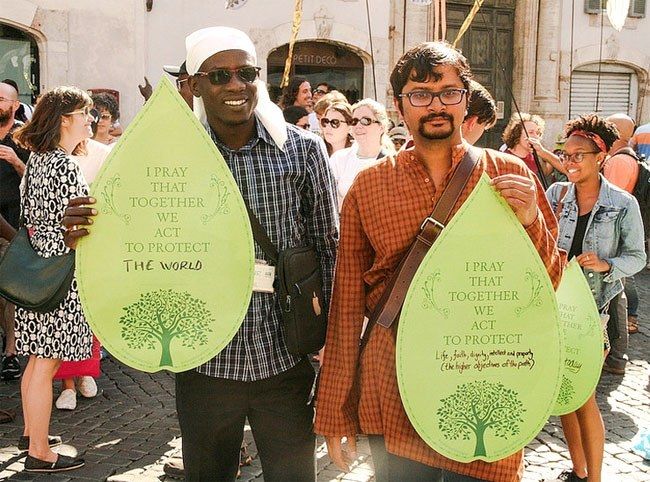 “The truth of the matter is that all of humanity needs to stand united in addressing the crisis of our times.” Photo credit: 350.org

“As we stand at this critical juncture in addressing the climate crisis we are particularly grateful to the Pope for releasing this encyclical as an awakening for the world to understand how climate change impacts people across all regions,” said Arianne Kassman, a climate activist from Papua New Guinea who was in attendance at the march to speak on the realities of climate change in her region of the Pacific.

“The truth of the matter is that all of humanity needs to stand united in addressing the crisis of our times. Climate change is an issue for everyone with a moral conscience,” she added.

Among the messages relayed to the Pope during the march was a request to make fossil fuel divestment part of his moral message in the urgent need to address the climate crisis.

“The fossil fuel divestment campaign is hinged on the same moral premise communicated by Pope Francis in his encyclical,” said Father Edwin Gariguez, executive secretary of Caritas Philippines. “The campaign serves to highlight the immorality of investing in the source of the climate injustice we currently experience. Which is why we hope that moving forward and building on this powerful message, Pope Francis can make fossil fuel divestment a part of his moral argument for urgent climate action.”

A petition urging Pope Francis to rid the Vatican of investments in fossil fuels has already gathered tens of thousands of signatures.

Over the past months, dozens of religious institutions have divested from coal, oil and gas companies or endorsed the effort, including the World Council of Churches representing half a billion Christians in 150 countries. In May 2015, the Church of England announced it had sold £12m in thermal coal and tar sands and just this week the Lutheran World Federation (LWF) announced it will exclude fossil fuel companies from its investments and calls on its member churches with 72 million members to do likewise. In total, more than 220 institutions have committed to divest from fossil fuels with faith institutions making up the biggest segment.

As world leaders prepare to meet in Paris later this year for the UN climate talks, the growing divestment movement will continue to fuel the ethical and economic revolution needed to prevent catastrophic climate change and growing inequality, a key message from Pope Francis’ encyclical. 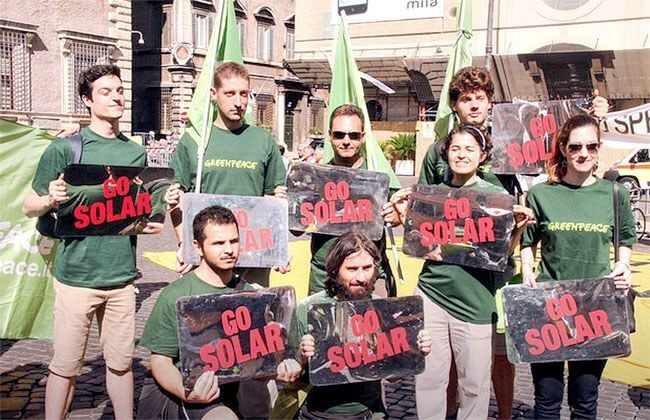 “The clear path required to address the climate crisis is one that breaks humanity free from the current stranglehold of fossil fuels on our lives and the planet. This encyclical reinforces the tectonic shift that is happening, we simply cannot continue to treat the Earth as a tool for exploitation,” said Hoda Baraka, Global Communications Manager for 350.org, one of the organizers of the march.

Pope Francis’s Encyclical Makes Waves from Brazil to the Philippines