‘We Are the Keepers of the Mountains … Love Them or Leave Them, Just Don’t Destroy Them’

“The Brushy Fork coal sludge impoundment is only one mile above my parents’ home. I better know all I can about it—not that it’ll do much, though,” Junior Walk told me as he drove me through the winding roads around Naoma, West Virginia. A West Virginia native and Coal River Mountain Watch activist, Junior knows all about mountaintop removal coal mining, coal sludge impoundments, driving an old truck up the side of a huge mountain and even death threats. 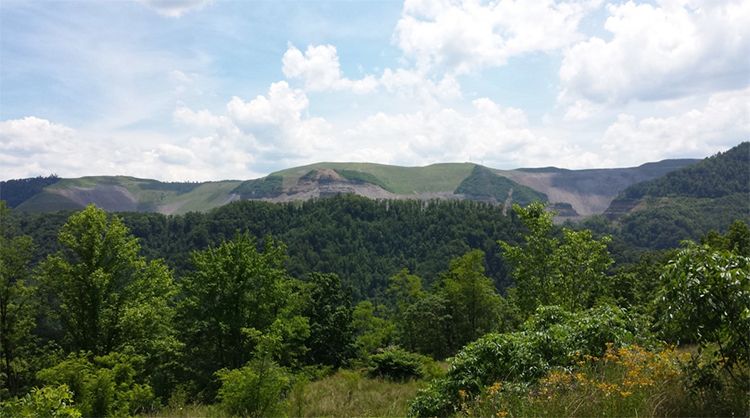 The 26-year-old grew up in the area and regularly gives tours of nearby mountaintop removal coal mining sites to groups of college students and other visitors like me.

If you’re not familiar with the process—mountaintop removal coal mining is when coal companies blow the tops off of mountains to get at the coal underneath. They push all the “waste” into nearby valleys, filling them. Coal companies have destroyed hundreds of mountains in Kentucky, West Virginia and Tennessee using this practice. The process also poisons nearby waterways with coal waste, threatening communities’ drinking water.

Fighting the coal industry in coal country is very serious—the death threats are real—although Junior said those have quieted down a bit as the industry has slowed in the past few years. Still, he has some scary stories.

“I haven’t had any actual attempts on my life in a few years,” he said. “People have waved guns around at me before, but it was in public in front of other people so I wasn’t too scared. The worst thing was when someone snuck into my parents’ yard in the middle of the night and cut the brake lines on my truck. In hilly country like this, that’s attempted murder. Thankfully I knew something was wrong almost as soon as I turned my truck on the next morning.”

It’s hard to believe Junior takes such predicaments in stride but he speaks about them matter-of-factly. And he’s not alone in those scary moments. Other big-name coal fighters like Maria Gunnoe and the late Larry Gibson have stories of being run off the road by other drivers, having their homes shot at and having their pets killed.

Such is life for activists in coal country. 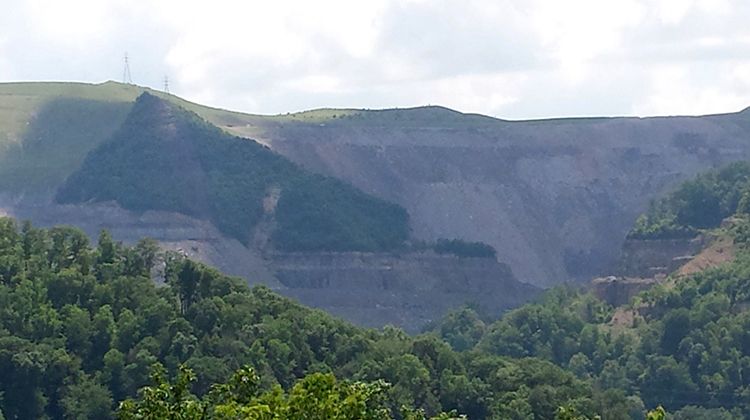 On this hot, sunny afternoon, Junior drives me first to see the Edwight coal site first. In the old but tough Coal River Mountain Watch Dodge truck, we wind our way up a very rough gravel path that once serviced a now-closed mine. The path is very overgrown and steep and there is the occasional glimpse of the bald mountain just across the valley.

When we reach the top we pull into an open clearing. “Watch for snakes,” Junior warns me as we walk up a short, grassy path to a rocky outcrop.

Across the valley is the Edwight mountaintop removal coal mine that went idle in November 2015. It’s a bit of a sucker-punch to see it among the endless green mountaintops in the area.

For more than eight years I’ve been writing about mountaintop removal coal mining for the Sierra Club. I’ve seen it in photos and videos—but I’d never seen it in person until now. 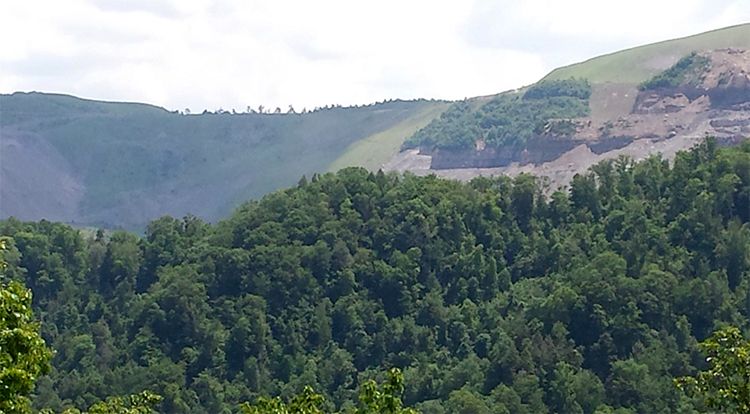 The Edwight site used to be known as Cherry Pond Mountain. It used to be covered in trees and hundreds of feet taller. Now the trees are completely gone and in their place are vast flat expanses covered in grass and boulders. Nothing about it looks natural anymore. Apparently now it’s “reclaimed”—but that mountain will never be the same again. You can’t remove the top of a mountain, all the topsoil and trees and wildlife and insects and biodiversity, shove it into a nearby valley (filling that tree-covered biodiverse valley) and expect anything to grow or live on it again besides scrub brush. It’s an ugly scar that is very hard to stomach.

I ask Junior if it still hits him hard.

“I’m kind of used to it in a way,” he said. “I mean, I’ve been leading these tours for years, it’s been going on for my entire lifetime. I bring college kids out here and they cry. There’s a site that threatens my parents’ house—that hits a little harder.”

Edwight is also home to a massive coal sludge pond—where the coal company stores the waste after washing and processing the coal. There are 2.5 billion gallons of coal sludge waste being held back by an earthen impoundment. There are many houses below that impoundment and many like it across the whole region.

It gets quiet as I stare at what used to be Cherry Pond Mountain.

“That’s going to look like that for the rest of my lifetime,” Junior said.

We walk back to his truck and start the drive to nearby Kayford Mountain. On the way we pass the Upper Big Branch Mine, where an explosion in 2010 killed 29 miners. Out front is a memorial with 29 hard hats, crosses and photos.

“My grandpa was a Vietnam veteran and a coal miner,” said Junior. “When I was younger he made me promise him I’d never join the military or go underground.”

Junior did once work for the coal industry as a security guard at a Massey coal processing site but hated every minute of it. It didn’t take much for Coal River Mountain Watch founder Judy Bonds to turn him into an activist against coal.

Just past the Upper Big Branch Mine is a huge impoundment, holding back billions of gallons of coal sludge. Below that impoundment is the former site of Marsh Fork Elementary, which activists and residents succeeded in getting moved into a new building farther away to protect the kids from a possible disaster if that impoundment gives way. But there are still homes “downstream” from that massive coal sludge disaster waiting to happen.

As we drove to Kayford, I ask Junior what he loves doing in his free time. He’s an avid hunter—”If it moves in the woods, I’ll shoot it and eat it”—but doesn’t see the point in fishing—”Don’t see the reason since we can’t eat any of the fish in the water around here.”

Huge coal trucks rumble by at high speeds and Junior said that never stops being terrifying with how narrow the roads are.

Soon we climb another very steep gravel path to get to Kayford. It’s gut-jerking—there are huge bumps and holes and Junior laughs and said, “I’m trying to take it easy for you!”

After a very rough 10 minute ride with what feels like hundreds of feet of climbing, we reach some houses on the mountaintop. This was home to the amazing anti-coal activist Larry Gibson. He helped set up a land trust for the property he owned near Kayford and created a gathering place for groups. There are cabins and a big open area to sit and eat. Junior was close friends with Larry, who died in 2012. 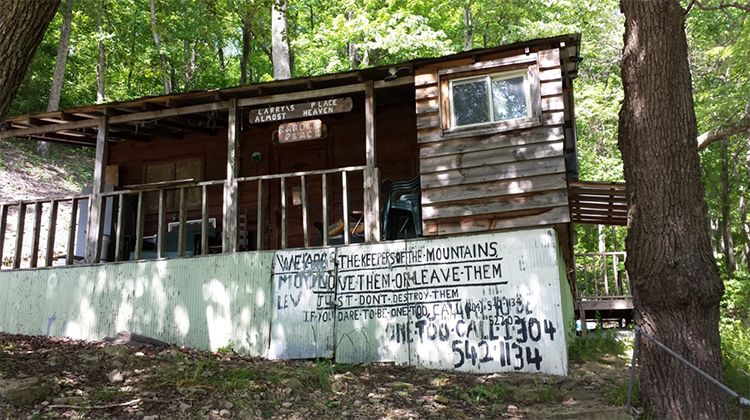 We stop the truck again to get out. At the top of the ridge is Larry’s old home—I’ve seen it in photos with a smiling Larry standing right next to it. There’s a painted message on the front of it:

“We are the keepers of the mountains. Love them or leave them, just don’t destroy them.”

Larry inspired an army of activists over the years, from Junior to Judy Bonds to the Sierra Club Beyond Coal Campaign Director Mary Anne Hitt.

His grave is next to his house—and also in what seems like a very appropriate move, it’s next to some solar panels as well. 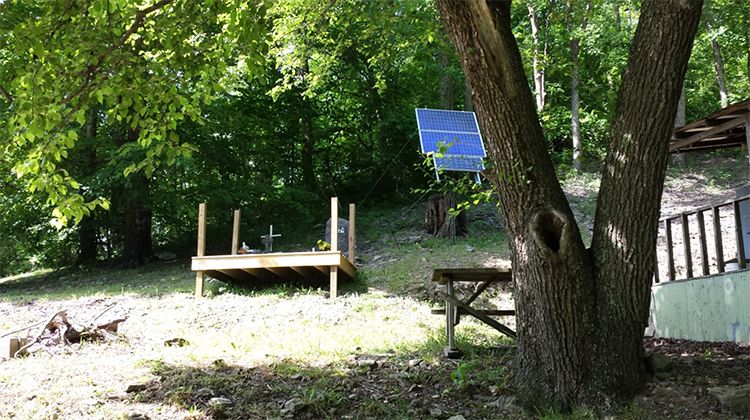 Junior and I walk down the gravel path a ways and he tells me how wonderful Larry was. I’d only spoken to Larry once; I wish I could’ve gotten to meet him in person.

We reach the ridge where the trees end and come out to a horrible view. Kayford Mountain is almost gone. Large sections are flat and covered with scrub grass and bushes. Off in the distance two earth movers—dwarfed by the vast scale of the site—push rocks and boulders around. 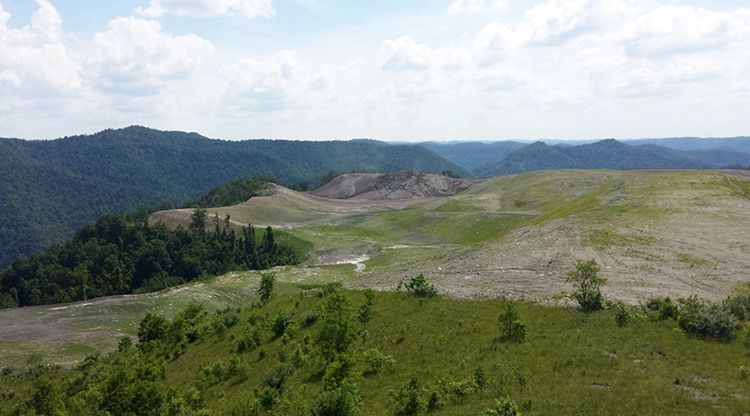 “The coal companies have to return the mountain to the ‘approximate original contour,’” he laughs. “You can see how well that goes.”

In the middle distance sits a massive tire and axle on its end, left over from another earth mover. If I were to stand next to it, it would tower over me. 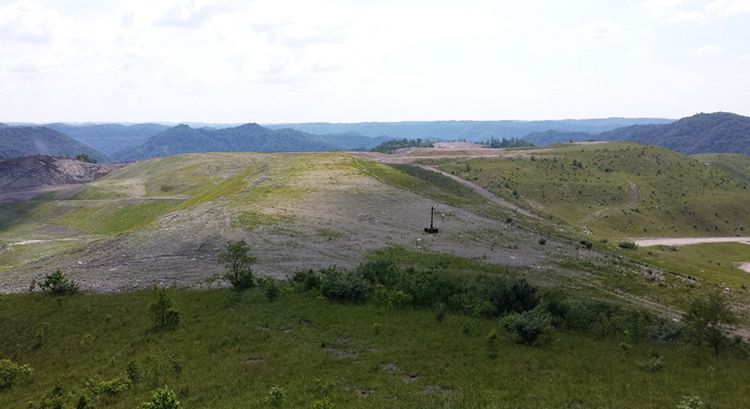 The destruction goes on for miles. Junior pointed out what used to be a valley but is now full of what used to be the top of Kayford Mountain. It’s as if someone put a major construction site in the middle of a beautiful wilderness. It sticks out amongst the endless mountains. 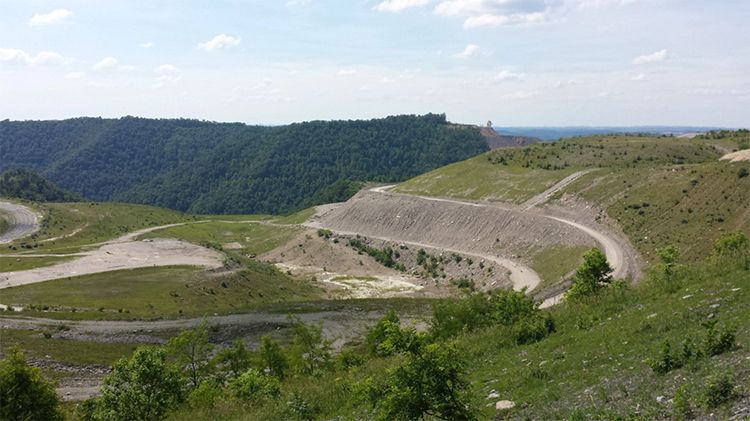 I can only think of violent ways to describe what I’m seeing. It’s a smack in the face, a punch in the gut, because the practice is so violent. The mountain will never be whole again—it’s missing part of its body. Birds won’t make nests there, deer won’t walk the trails, no frogs or salamanders will make their homes in any rocky trickling streams.

No one will walk there to enjoy it or hunt there. Neighbors will always look up and see that jarring empty space. Even worse, many neighbors will never have clean water in their streams and rivers any more. They’ll be in the shadow not of God’s creation, but of an ominous threat to their lives

“Larry put his land into a land trust after he saw the beginnings of Kayford getting destroyed,” Junior explains. “He saw a bulldozer go right through an old family cemetery with no pause. He didn’t want that to happen anywhere else. He saved another nearby cemetery from destruction—that one holds my great grandparents’ graves. 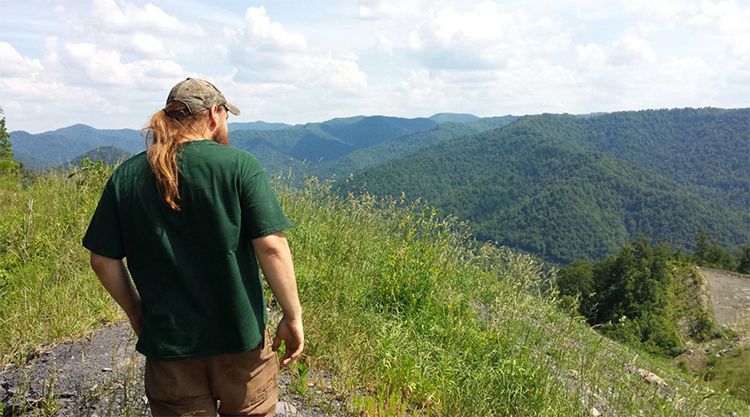 We sit again for a while in silence.

It hurts to look at landscapes like Kayford and Cherry Pond. Is this really how we need to get our power? Why does coal have to be the only industry in West Virginia? Isn’t there a better way?

You can’t put anything on top of those now ruined mountains. They’re now too low and too unstable for wind turbines. In another part of West Virginia, builders put a prison and a Walmart on former mountaintop removal sites. Because the ground is now so unstable, the foundations of those buildings must continuously be shored up.

Some of Baltimore’s electricity comes from mountaintop removal coal. I see the coal trains come through my neighborhood. I have a direct connection. But even if I didn’t, how could I not say something about this destruction? How could I not stand up against it?

On the walk back to Junior’s truck, he stops. “Want some coal?” he asks as he pulled up a small chunk from the driveway. I take it with me as I go up to Larry’s home. I stand in front of the house in silence again as Junior continues on to the truck.

“Thanks, Larry,” I whisper, along with a small prayer that I can be as tough and useful in this fight as he was.

Germany Bans Fracking But Does It Go Far Enough?
30 Largest Electric Utilities Ranked on Advances in Renewable Energy and Efficiency